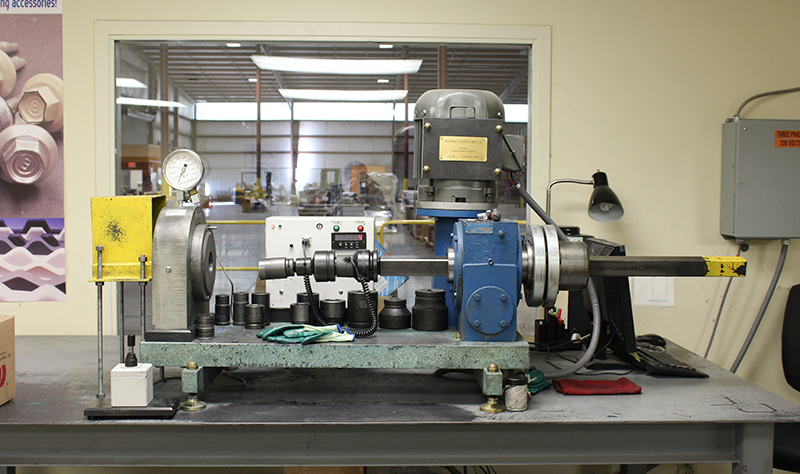 We at Frontline, have a high end in house computerized fastener testing system. We offer Full rotational capacity testing with computerized reports.
Our testing is done by high end Skidmore HT4000 model machine for exact reports.

Each lot dispatched from our end is tested in house performing ROCAP Tests.
ROCAP test is majorly performed to evaluate the presence of a lubricant, the efficiency of the lubricant, and the compatibility of assemblies as represented by the component selected for testing.
Studies have shown that galvanizing increases the friction between nut threads and bolts along with variability of torque-induced pretension.
Rotational capacity test results must show that nut will not gall on the bolt and desired pretension load will be developed by assembly.

This procedure can be done on all bolts which require ROCAP Testing despite of length. There is separate procedure for ling and short bolts. Short bolt can be defined as specific size of bolts which are very short to be tested in the device. Long bolt is defined as any specific bolt of adequate length to be installed in calibrated bolt tension measuring devices.

1. Procedure starts by taking 2 assemblies from rotational capacity lot. One lot from bolt product is assembled with nuts of recorded lot number of corresponding diameter along with washers of production lot. All bolts are measured from end of the shank to under the head.

2. Assembly is installed in manner where three to five threads are in grip. One can use steel shim plates or hardened spaced bushing as per requirement for full thread engagement of the bolt threads with end of nuts. One should never use more the 2 washers while performing rotational capacity test. It has been seen, few bolts barely fit into device, one should make sure that end of the bolt is at least flush with outer face of nut.

3. One should snug the joints by wrench to low level tension or by hands in order to start test correctly.

4. During test, mark calibrator face plate, bolt and nut in straight line. It is important that bolt should not rotate while turning element.

5. Further bolts should be tighten as per measuring standards.

6. After the test, remove assembly from machine. Inspect nut threads and bolt threads for thread shearing and thread stripping. One can also check for signs of tensile failure of bolts. if shearing or stripping or any other failure is seen, assembly fails the test.